During the past year, we have held a number of special events, such as the following.

This event was held last April at the Armourers Hall in London between the President and senior officials from his administration and members of the BUCC, at which the President gave an excellent review of Ukraine’s recent achievements to recover from the sharp economic decline resulting from the conflict in eastern Ukraine, resolve the banking crisis, lower inflation, solve the VAT problem, develop the army, etc. A number of potential major new projects for Ukraine were then discussed over dinner, which should significantly benefit the Ukrainian economy (please see photographs photograph above from this event). 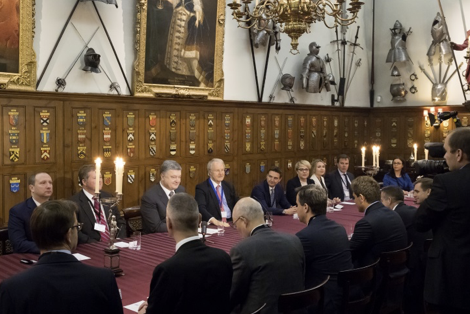 The luncheon was held on 23 June this year to open the Lviv Alpha Jazz Festival, in the presence of the Mayor of Lviv, Lviv City and Lviv Oblast officials, BUCC members and Lviv business leaders, at which the Ministry of Infrastructure made a presentation.

Last month, the BUCC held exhibitions and receptions on the Ukrainian Impressionist artist Mykhailo Tkachenko, to begin with in Lviv, at the Lviv National Museum of Art followed by dinner at the Leopolis Hotel Dining Room, and then in Kyiv, at the Hyatt Hotel Ballroom followed by dinner in the Hyatt’s London Room. Professor James Rubin, one of the world’s leading experts on Impressionism and the author of the principal study of Manet and over 60 other books and important articles (his biography is in Wikipedia), spoke at these events as well as at three leading Ukrainian universities. The exhibition at the Hyatt’s Ballroom specially featured 20 paintings by Tkachenko that are privately held and are not otherwise generally available for public viewing. Professor Rubin is advising the BUCC on its proposed book on Tkachenko (with Korners Art) and on the BUCC’s proposed major exhibition of Tkachenko paintings to be shown in leading museums in Kyiv, London, Paris, New York, Chicago and Toronto (discussed further below under CSR). (Please see the photograph below from this event.) Ukrainian Week in London and Ukrainian IT Days in the UK. For 2018, the BUCC is organising Ukrainian Week in London and Ukrainian IT Days in the UK to promote trade, investment and cultural exchange between Ukraine and the UK. 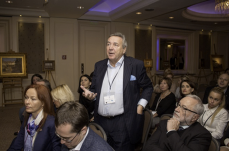